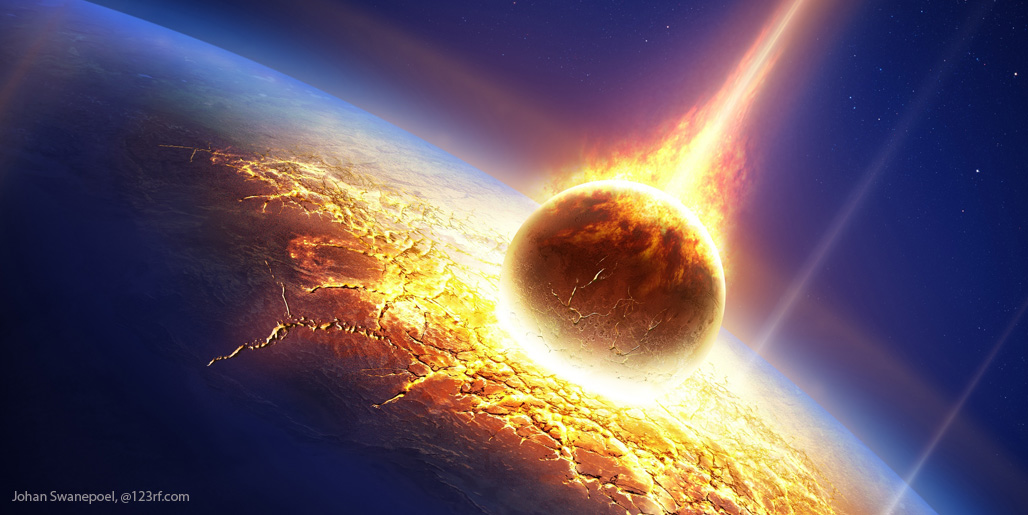 Asteroids are rocky objects wandering in space, generally orbiting around a star or planet. They are too small to be spherical like planets, a shape that results from the planets’ own gravitational pull. The largest asteroids are about 900 km in diameter, and the smallest, called meteoroids, are even smaller than a stone.

When asteroids cross a planet’s orbit, they are likely to collide with the planet, particularly in the case of meteoroids. You’ve probably seen one entering Earth’s orbit: it zoomsthrough the atmosphere at a high speed, and friction with the air causes it to heat up and ignite, leaving a bright and fleeting trail in the night sky. They are shooting stars.

What we refer to as “shooting stars” are in truth meteoroids entering Earth’s atmosphere and catching fire. The fragments that manage to reach the Earth’s Surface are called meteorites.

There’s a belt between Mars and Jupiter packed with asteroids orbiting the Sun. Most of the asteroids in the solar system are located there. There are millions of them—many measuring more than 1 km in diameter—, but the total mass of these bodies is less than 6% of the Moon’s mass. Their orbit around the Sun is stable, but some get deflected and cross through the path travelled by the planets. This asteroid belt is thought to have resulted from Jupiter’s imposing gravitational pull; during the first stages of the solar system, the pull was so powerful that it prevented these fragments from aggregating and forming another planet.

Not all asteroids are in this belt. Others can be found orbiting other planets. These asteroids are called Trojans. Jupiter is the planet with the most Trojans, since it has the greatest gravitational pull of all the planets in the Solar System. There are also centaurs orbiting the Sun, but they are beyond the asteroid belt among thegiant planets. Last but not least, some asteroids labeled as NEO (Near Earth Objects) greatly interest us because they move close to Earth. Their orbits cross our planet’s orbit, so they are monitored closely… 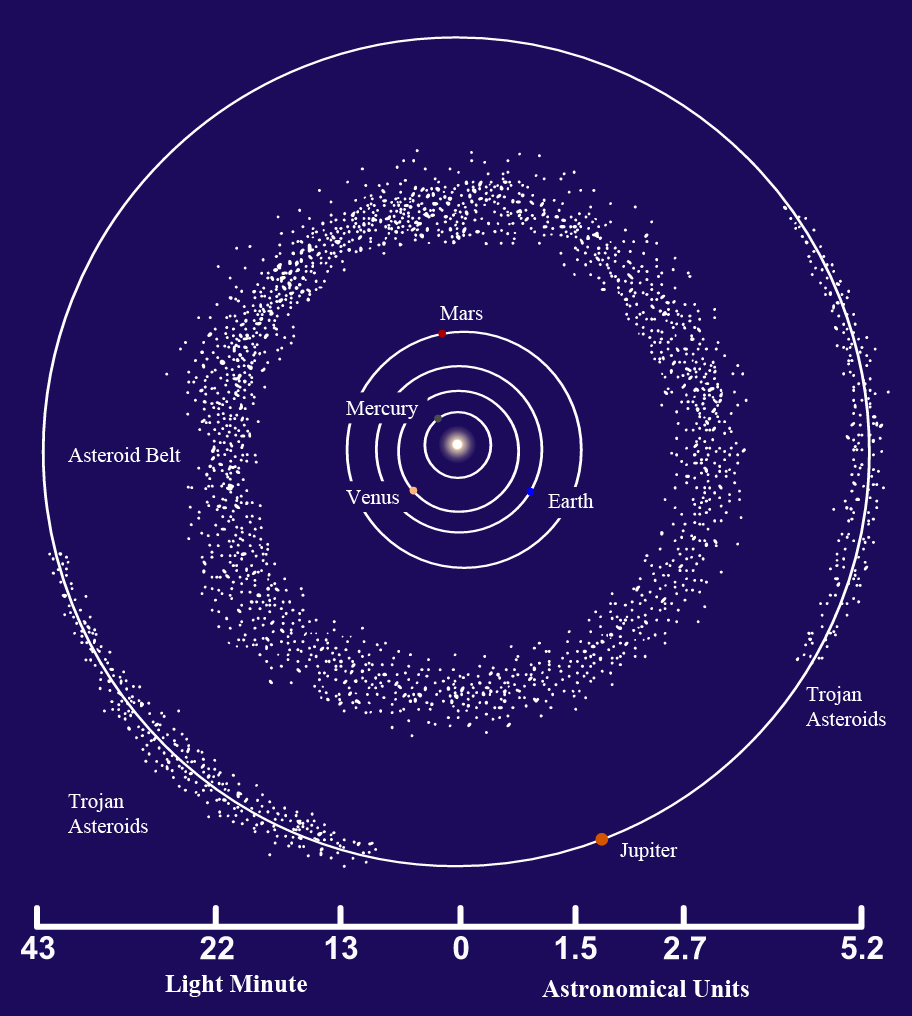 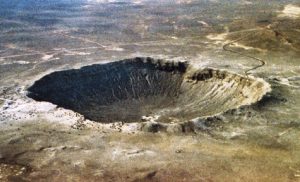 Barringer crater in Arizona (USA) is 1,200 m in diameter and was caused by a fairly large meteorite impact about 20,000 years ago. It’s one of the few recent craters to have survived the fierce effects of erosion on the Earth’s surface. In contrast, thousands of craters are visible on the Moon due to the almost complete lack of erosion.

Depending on its size, composition, and path, an asteroid hitting a planet will form a crater on the planet’s surface. An object measuring a few dozen meters in diameter will produce a very powerful blast, much greater than the power of an atomic bomb.

Today, tens of thousands of meteorites hit the Earth every year, but this is not an uncommon event. Shortly after the solar system was formed, impacts with relatively large and small asteroids were much more frequent on all the planets. The planets were under intense and relentless bombardment! The craters on the Moon’s surface bear witness to that. So, how is it that there are no craters similar to those on the Moon on the Earth’s surface? Why is it that the Earth’s surface does not resemble the Moon’s, with its distinctiveSwiss cheese look? The answer issimple: Earth experiences erosion, a phenomenon barely found on our satellite. It is a process of wear caused by the air, water, and living organisms on the planet. Together, they are capable of erasing these geological scars from the planet’s surface.

To have an idea, erosion over a few hundreds of millions of years could flatten the Pyrenees and transform them into a plain.

During the first stages of Earth’s formation, intense asteroid showers were commonplace. Fortunately, the rate of impacts decreased over the years and life appeared. The last large impact—a powerful explosion which caused all oceanic water to boil and evaporate—is thought to have occurredaround 4 billionyears ago. Water on Earth has been in the liquid state since then, a necessary condition for the appearance and sustainment of life as we know it. 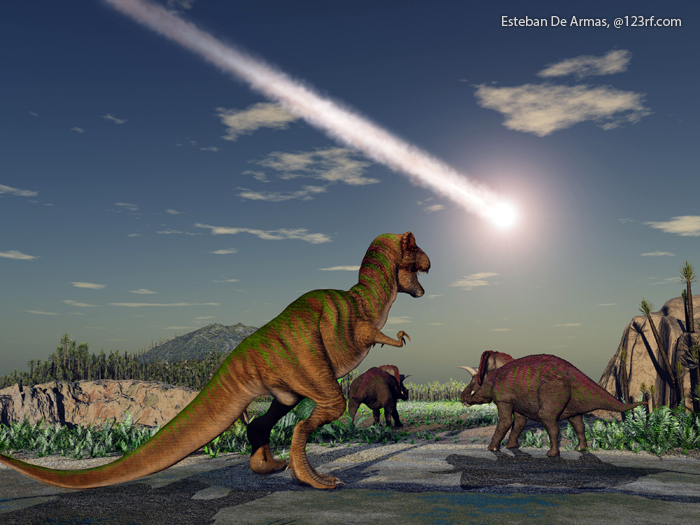 Impacts, however, kept occurring. The most famous one contributed to the extinction of the dinosaurs; it hit an area near present-day Mexico about 65 million years ago. The resulting explosion was much more powerful than dozens of thermonuclear bombs together, sending large amounts of dusty debris and vapor into the atmosphere, reducing the amount of sunlight reaching the Earth’s surface over a very long time.

That said, this wasn’t the last impa ct to hit the Earth. Smaller asteroids regularly hit the surface, so astronomers closely scan the night sky and calculate the paths followed by the objects nearest to Earth. In fact, a relatively large asteroid coming Earth’s way was recently detected, and it is expected to be rightabove us by 2029. This is not science fiction!

The Moon is thought to have formed when a huge asteroid hit the Earth and the impact tore out a fragment that ended up orbiting around it. 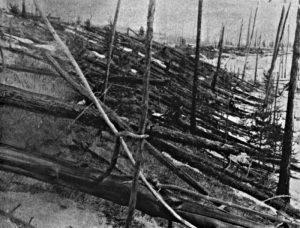 The Tunguska event was a large explosion that occurred near the Stony Tunguska River, in Yeniseysk Governorate (now Krasnoyarsk Krai), Russia.

At 7:17 a.m. on June 30, 1908, a huge explosion lit up the skies of Tunguska, a forest region in central Siberia, Russia. The blast knocked down trees and burned forests over an area larger than 2,000 km2. People on horses were knocked down and glass was shattered as far as 400 km away from the blast. The conductor of the Trans-Siberian Express had to stop the train for fear of derailment. The energy from the blast has been estimated as the equivalent of 10 or 15 megatons (the Hiroshima bomb released “only” 0.015 megatons of energy). But strangely enough, no crater was formed. Today, the scientific community believes that a blast occurred shortly before the meteorite impacted the surface, approximately 8 km above it. The meteorite was about 80 meters in diameter, mostly composed of ice, and likely to have been a fragment of a comet. Since then, similar cases have been reported.

Presently, about 4,000 objects roaming in space are treated as NEOs. When one of these bodies gets closerthan 0.05 Astronomical Units (7.5 million kilometers) to the Earth, it is classified as a PHA, a Potentially Hazardous Object. Their name is well deserved: if one of these objects hit the Earth, the consequences for our civilization would be devastating. As of today, we know of about 800 objects PHAs. One of them in particularly worrying: Apophis.

According to some reliable calculations, Apophis is a large asteroid that may reach our planet around 2029. Although we know now that there won’t be a full impact, the encounter will be so close that the effects could nonetheless be disastrous. Alarm bells are starting to ring, and scientists are already undertaking measures including projects aimed at deflecting it. One such project is run by a group of Spanish investigators: the Quijote Project.

In truth, accurately calculating the path of an asteroid is still a daunting task. Scientists believe that Apophis may not be such a real threat, but bearing in mind that a powerful asteroid impact occurs every 40,000 years, it is not a bad idea to try to be ready for any other similar threat.

Other rocky bodies are not large enough to be considered planets, or small enough to be labeled as asteroids. Pluto, lurking in the outer fringes of the solar system, is the most paradigmatic example. Until very recently Pluto was considered a planet, despite being smaller than the Moon. Astronomers solved this problem by naming cases such as Pluto ‘dwarf planets’. Pluto attained this status in August, 2006, together with Ceres and Eris, which used to be labeled as asteroids.

Was Life Hitching a Ride on Meteorites? 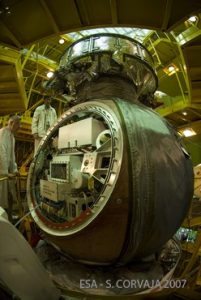 Is it possible that we are all aliens? That’s what panspermia, a scientific hypothesis claiming that life may have appeared on Earth transported by meteorites. Although the theory does not have many proponents, it has recently received some experimental backing. Jacek Wierzchos, a chemist at the Universitat de Lleida (Spain) has taken part in the experiment.

A sample of lichens and microorganisms was sent into space on the Photon M3 spacecraft that was launched last September from Baikonur (Kazakhstan). Two weeks later, the spacecraft returned to Earth and the living organisms were still thriving. “If organisms are capable of surviving a trip through spapce, we can’t ignore the fact that life may have reached Earth from space,” says Wierzchos, the man who designed this experiment together with Carmen Ascaso and Asunción de los Ríos, from IRN-CSIC (Spain’s Institute of Natural Resources, Madrid), Leopoldo García Sancho, from the Universidad Complutense of Madrid, and Rosa de la Torre, from INTA (Spain’s National Institute for Aerospace Technology).

Maybe life did not reach Earth traveling inside meteorites, but a large amount of organic matter—the type of matter that living organisms are made of—definitelyhas reached continues to reach Earth—confined inside of meteorites ever since Earth was formed.