2) LET’S GET THE BALL ROLLING! 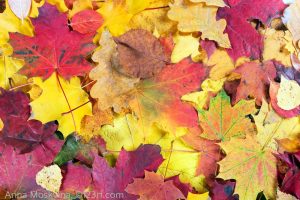 The green band is chlorophyll. The other bands of color on the strips are the other pigments involved in photosynthesis. These pigments were not visible because they were masked by the predominant green chlorophyll. Repeat this experiment, this time using an autumn leaf from the same tree. Also, compare the results with leaves from other trees species. Do the same bands show, and if so, do they come out in the same order?